(If you’re reading the original edition, this is Chapter 14.)

Adriane finds herself in a strange forest. One of the trees before her has a door in it, so Adriane goes through it. On the other side is a garden, in which the rest of the party is having a mad tea party, complete with constantly-changing outfits that look like they came out of Gothic & Lolita Bible. In the new edition, “mad tea party” is a total misnomer, because there’s no tea at all, only juice.

The party starts spewing some nonsense about Adriane being a loner and not wearing a hat. Adriane quickly realizes that she’s in a dream state — and no, it’s not the weird shapeshifting outfits that tip her off. It’s because the party mostly ignores her.

Adriane tries asking the party if they’ve seen Dreamer anywhere. The party reveals that Dreamer’s not on the “guest list”, because he and all the other mistwolves died … and it was all Adriane’s fault. Adriane tries to leave the party, but all paths lead back to where she started. The party restates what Adriane just discovered, and tells her that she totally sucks.

Adriane then realizes that she, and the rest of the party, don’t have their Sparkly Rocks equipped! Of course, the party has no idea what the hell these Sparkly Rocks are. Adriane tries to world walk out of the mad juice party, but instead walks into a table. The party encourages her to stay with them and be normal. Adriane almost considers giving up and moving with her parents to New York….

When, suddenly, another Kara appears! This Kara starts waving her Unicorn Jewel around and totally disses everyone’s fashion sense. (I guess she’s not a fan of lolita style.) This somehow freezes the false party. Kara then tells Adriane to leave the dream state and find the Power Crystal.

But wait … how did Kara enter Adriane’s Trippy Dream Sequence? Well, Kara cast Circle of Friends so she could give the party’s magic to Adriane. And since Kara has to be physically near Adriane to give her the magic, she got transported here.

Adriane thinks that it’s too late to do anything for Ravenswood. Kara then informs her that Dawnrunner has recovered, and that Adriane still has a chance to save Ravenswood and all the mistwolves. Suddenly, Adriane discovers that her Wolf Stone is reequipped.

Now with a weapon and the party’s magic, Adriane world walks to the gorge on the Spirit Trail that Stormbringer is bridging in her mist form. Orenda is waiting for her there, but she speaks with a different voice now. Adriane assumes that the Spider Witch is speaking through the sylph. She does her best Charlton Heston as Moses impersonation — except replace “my people” with “the mistwolves”, and omit the unseen snake fight:

Adriane wants to continue the boss battle from earlier, but without a bonded animal equipped, she can’t control her magic.

Suddenly, the Power Crystal appears, and Orenda takes it! Adriane tries to fight back, but Dreamer suddenly attacks her! Chain has possessed Dreamer, and he tells Adriane that she can never save the mistwolves. Adriane tries to cast Heal on Dreamer and Stormbringer (after realizing that she can still cast healer spells in the new edition). Then the Spider Witch reveals that Chain is her paladin! Chain!Dreamer leaps for the Power Crystal. Stormbringer tells Adriane to save the Power Crystal … but in order to do this, one of Adriane’s bonded wolves has to die.

Next time: The Insect Warrior makes his final appearance in the series.

(If you’re reading the original edition, this is Chapter 4.)

No, the party doesn’t really reunite with Stormbringer. Tweek explains that what they’re seeing is a hologram of Stormbringer when she was Dreamer’s age.

Wait … there’s magitech holograms now? And they’re on Earth, in this hidden basement room? Goddammit, why hasn’t this been revealed to everyone else on Earth by now?

The party discovers that they are in a hidden workroom. Tweek finds a data crystal, which is the source of the hologram mentioned above. After some calibrations, Tweek gets the crystal to work properly. The crystal contains a journal kept by Henry Gardener, in which he recorded images of what he believed to be the last living mistwolf. Gardener learned that Stormbringer has no memories of Aldenmor, and that she is waiting for something. He believes that Stormbringer will somehow save the mistwolf pack. The recording also reveals that Gardener once had a mistwolf of his own, but he can’t help the pack because helping the current party is more important.

While all this is going on, Ozzie and the fairy wraith find a magic Ouija board. Kara explains to all the non-humans that Ouija boards can contact ghosts. She also has some strict rules for using these things: don’t go into a haunted house after dark, and don’t ever go into the basement. Of course, the party has already broken all these rules.

So the party decides to play Ouija, except they use their Sparkly Rocks to guide the pointer. Weird things start to happen, like the lights going out and doors slamming shut. Eventually, the party contacts a spirit: Orenda. Orenda needs the party to help Stormbringer.

Suddenly, the fairy wraith explodes, and a beam of red light shoots from the Ouija board pointer into Tweek! Tweek says, “Fascinating. I’ve been possessed by unspeakable evil.” And then he blows up.

Tweek, thank you for having the best line in the book ever.

Next time: The Department of Fish and Game shows up with bear tranquilizers.

The new edition starts this chapter off with a Trippy Dream Sequence:

The explosion of the immense crystals shattered Emily’s call as the healer tried to reach her friend.

“We have to go now!” Kara pulled Adriane from the crumbling chamber.

“No!” The warrior shook free from the blazing star. She ran back inside, choking on the dust filled clouds of black fire as blasted rock rained from the roof.

In the center of the chamber, a form shimmered — a lone wolf. Stormbringer’s silver coat and warm golden eyes were fading away as she pulled the last of the mistwolves to safety from the Dark Sorceress’s death traps.

But she was too late.

Storm’s eyes focused on the warrior. “You must let me go.”

“No!” Adriane screamed, tightening her hold. She would never fail Stormbringer, not now, not ever! “Don’t leave me!” The warrior reached out desperately, fingers touching her bonded packmate’s vanishing face.

With a thunderous boom, the chamber collapsed.

“Storm!” Adriane reached for her packmate, but her fingers clutched only empty air.

The original edition picks up here. Adriane wakes up. She has been dreaming about Stormbringer’s death for a while now, and these dreams usually play out like in the Trippy Dream Sequence above. Outside, she hears wolves howling, so she joins in.

Suddenly, Adriane senses that something is amiss. The mistwolves are lost, and Adriane has to help them! So she runs into Ravenswood, following a shining light in the forest. The woods around her turn into a crazy Technicolor blob. Eventually she reaches the Rocking Stone, where she hears a strange song.

And then a willow tree summons Adriane. 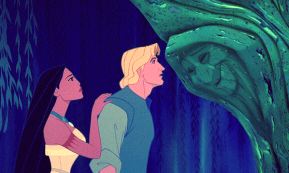 Someone has obviously been watching Pocahontas.

Suddenly, a wolf with David Bowie eyes appears! The new wolf introduces himself as the pack leader, and voices his distaste for humans. He thinks that humans will always hurt the mistwolves. Adriane tells the new wolf to get out of her territory. The wolf then attacks her. Adriane fires a Magic Missile at the wolf, but it has no effect….

And then Adriane wakes up! Argh, it was one of those dreams within a dream!

Dreamer is going wild on top of Adriane, attacking some imaginary thing. Adriane calms him down, but notices that something is wrong: Dreamer has trouble communicating telepathically! He just sends images of a spider’s web trapping Ravenswood, evil creatures, and Adriane’s grandmother sleeping in the kitchen. Adriane thinks Dreamer’s telling her that Gran is in danger, so she runs down to the kitchen.

But it turns out that Gran is waiting in the kitchen with some hot cocoa prepared for her. Gran tells Adriane that the forest spirit is dying. She also reveals that she has spoken to this forest spirit before, the last time being when Adriane moved to Ravenswood. She wanted Adriane to move to Ravenswood because she could learn magic, whereas her mother could not. Oh, and she also mentions that Adriane’s dream may have been real.

Adriane looks down at herself and realizes that she’s covered with mud and dirt. So maybe she did run into the forest and see a talking willow tree! Adriane tells Gran about this, which prompts Gran to give her a new Indian name: Little Wolf.

Next time: The party learns how to level up.